Our first full week of field work is behind us, and we have a much better appreciation of the many challenges that our partner communities face trying to raise goats and pigs with the limited resources available to them. We made household visits to three more communities since Devon's last update. I'd like to highlight a few of the remarkable women we've met from each of the communities.

A grandmother and caregiver of two grandchildren, Jovia is a model of hard work and perseverance in the face of many challenges. She was loaned two goats through the pass-on project last year, after building an extremely impressive raised goat pen and planting elephant grass for feed. She had collected the goat droppings and used the manure in her small matoke plantation. She proudly showed us the reward for her hard work - the leaves on her trees were much bigger and fuller than the surrounding plantations. However, as a widowed grandmother she is quite vulnerable, and her two goats were stolen three months ago. We like to approach each challenge our beneficiaries face on a case-by-case basis. Jovia had done everything right, and we wanted to show her that we appreciated her hard work and excellent management skills. However, given that thieves have little fear of a single grandmother, we could not simply loan her more goats to be stolen again. With the help of Joseph, a FAOC extension worker and local farmer (who also acts as our translator) Tara and I discussed the issue her. We came to the conclusion that if she was able to securely lock her goat pen theft would no longer be a concern. Given the cost involved, we told her that if she was able to build a secure door for the pen we would provide the lock and lend her two more goats. We didn't need Joseph to translate her reply; she was so happy, clapping her hands enthusiastically! 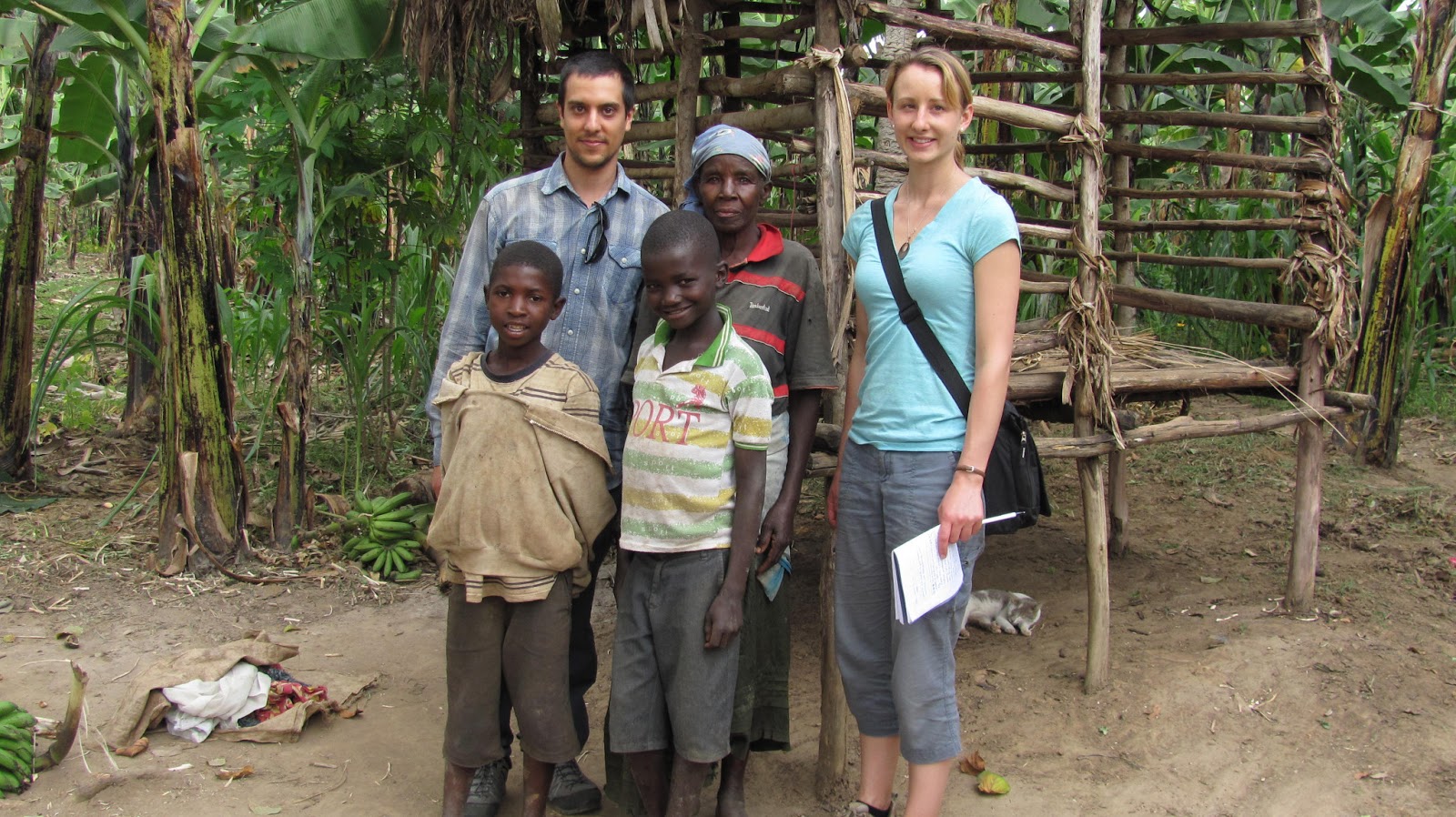 Jovia with her two grandchildren, Tara and me. Her goat pen is in the background.

Marian benefited a goat in 2011. She is now raising that goat's kid. However, she is also taking care of her son's goat, which had twins, and has two other orphaned goat kids. Altogether, that makes a lot of hungry young goats. However, she happily informed us that she has raised orphaned kids before, supplementing them with cow's milk. Luckily, thanks to Dr. Haines and the Saskatoon Colostrum Company, we received a donation of about two dozen bags of colostrum for lambs and kids. The colostrum will certainly help Marian provide the nutritional needs of the kids as she slowly increases the amount of green feed over the next few weeks. 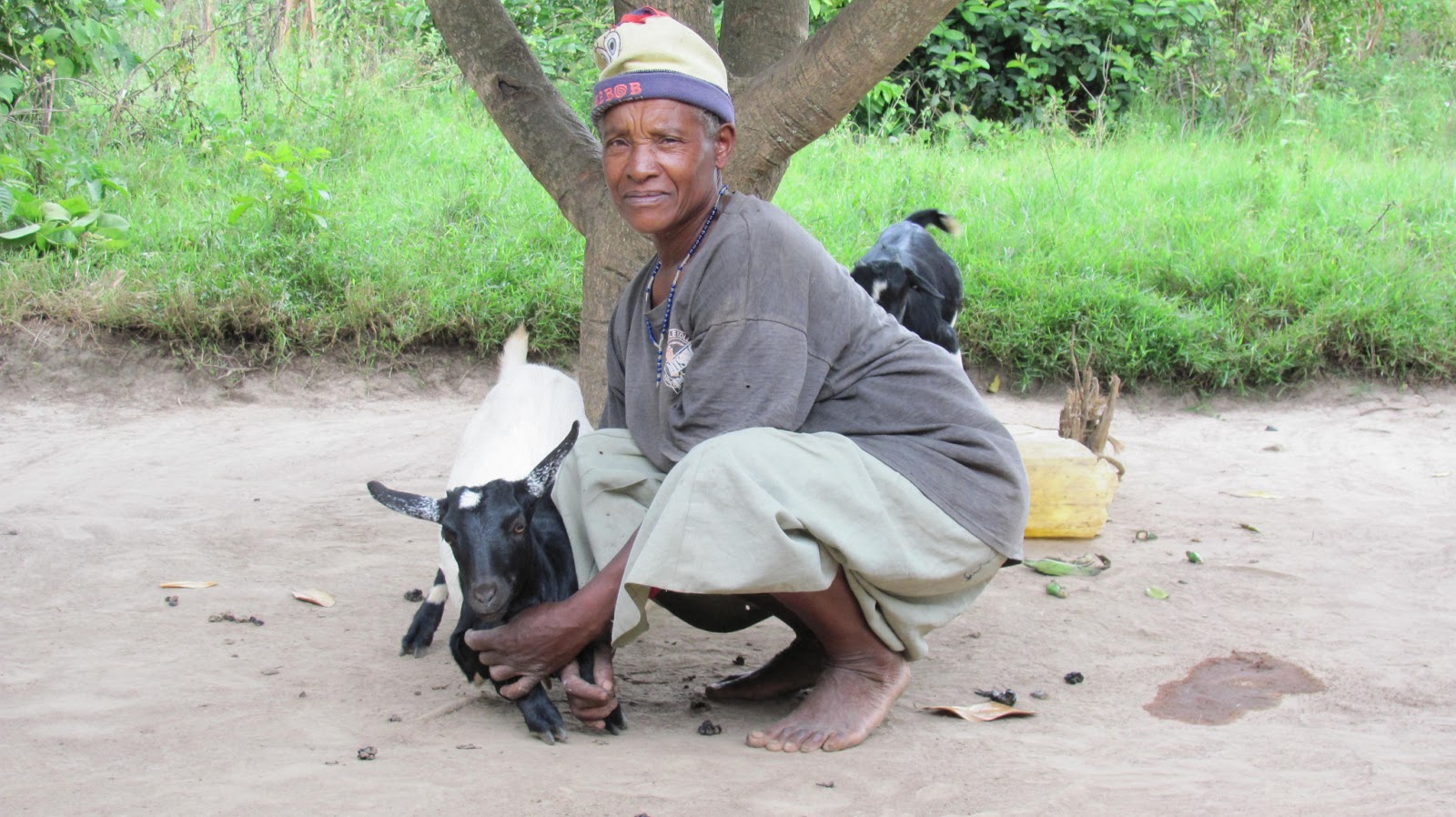 Marian with the second generation of the pass-on project 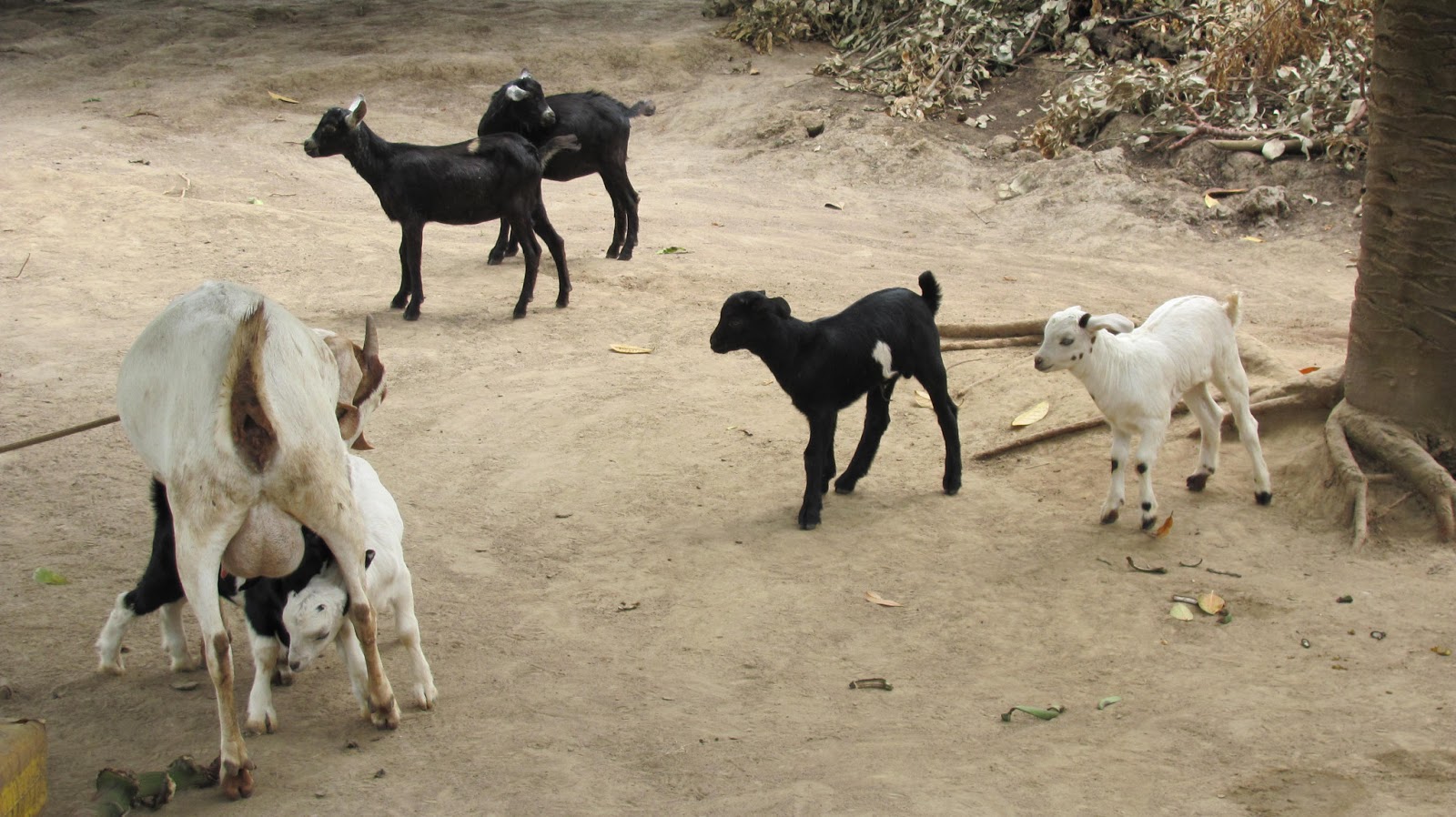 A very busy foster mom
Scovia, from Kikokwa
Scovia is truly one of our success stories. She has one of the most impressive little farms we've seen so far. She was loaned a pig through FAOC's pig pass-on project last year and now has two big sows that have produced seven piglets each. She plans to pass two on to other members of her group to repay her loan, and the remaining piglets and her sows will help her provide for her family. Her management skills are excellent, as evidenced by the healthy piglets, as well as a nice farm of goats, geese, and two very cute puppies that Tara spent a lot of time photographing. 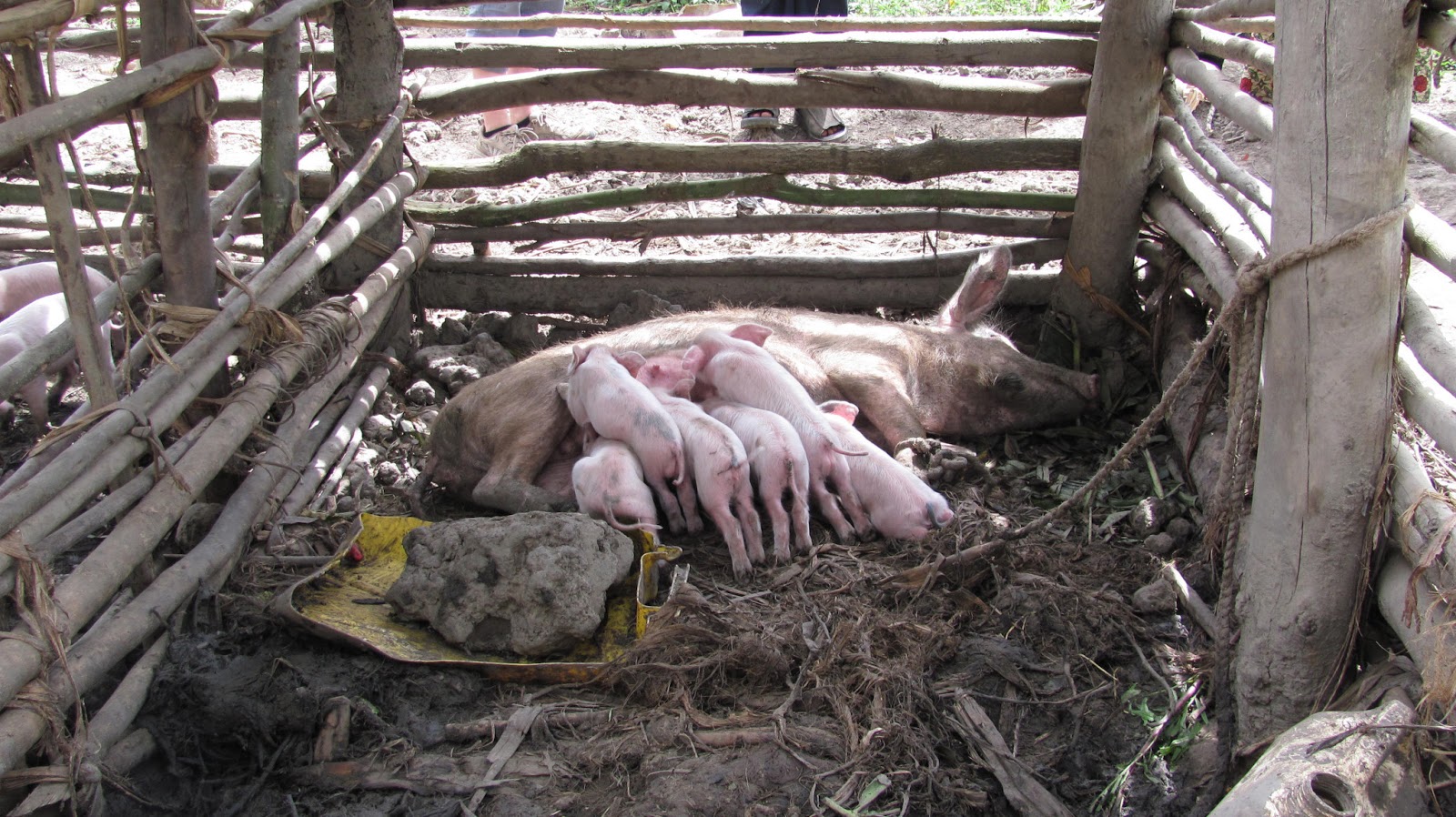 The sow that was loaned to Scovia, with her seven piglets 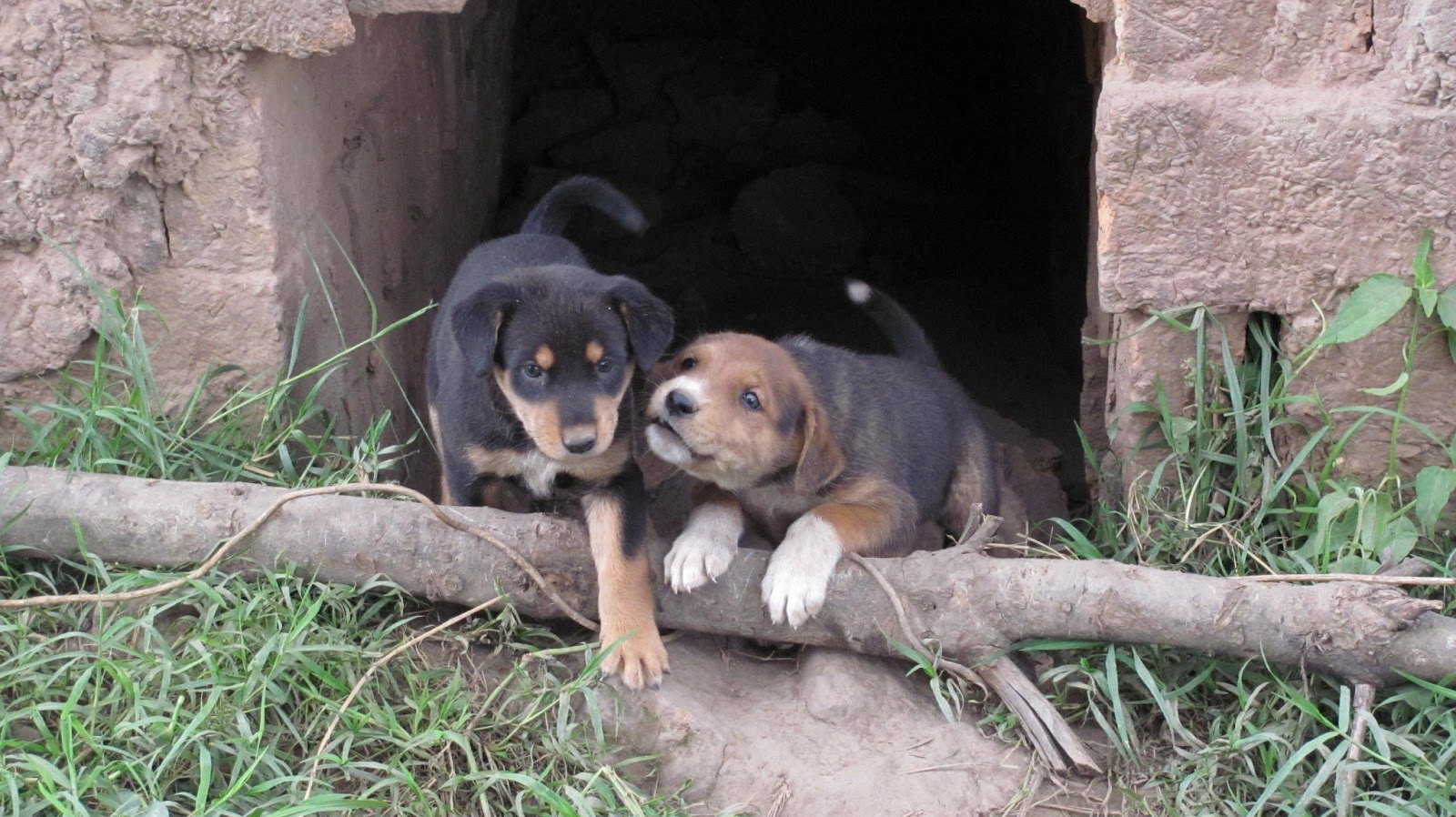 Meburo, from Briere
Meburo is a widow who received two goats that were passed-on from another beneficiary. She sold one of the goats to pay for her grandchildren's school fees, but now has two offspring from the other goat. She was very amused by the introduction that Ilse, Katie and I attempted in Runyankole. She said "osiibirota, nyabo" (good afternoon, m'am) to Katie and Ilse and "osiibirota, sebo" (good afternoon, sir) to me and burst out laughing when I (correctly?) replied "osiibirota, nyabo". Before even showing us her goats she insisted on picking three sweet potatoes and a pumpkin to take with us. Not being able to offer much in return, the three of us did a physical exam of her goats and trimmed their feet as a thank you. 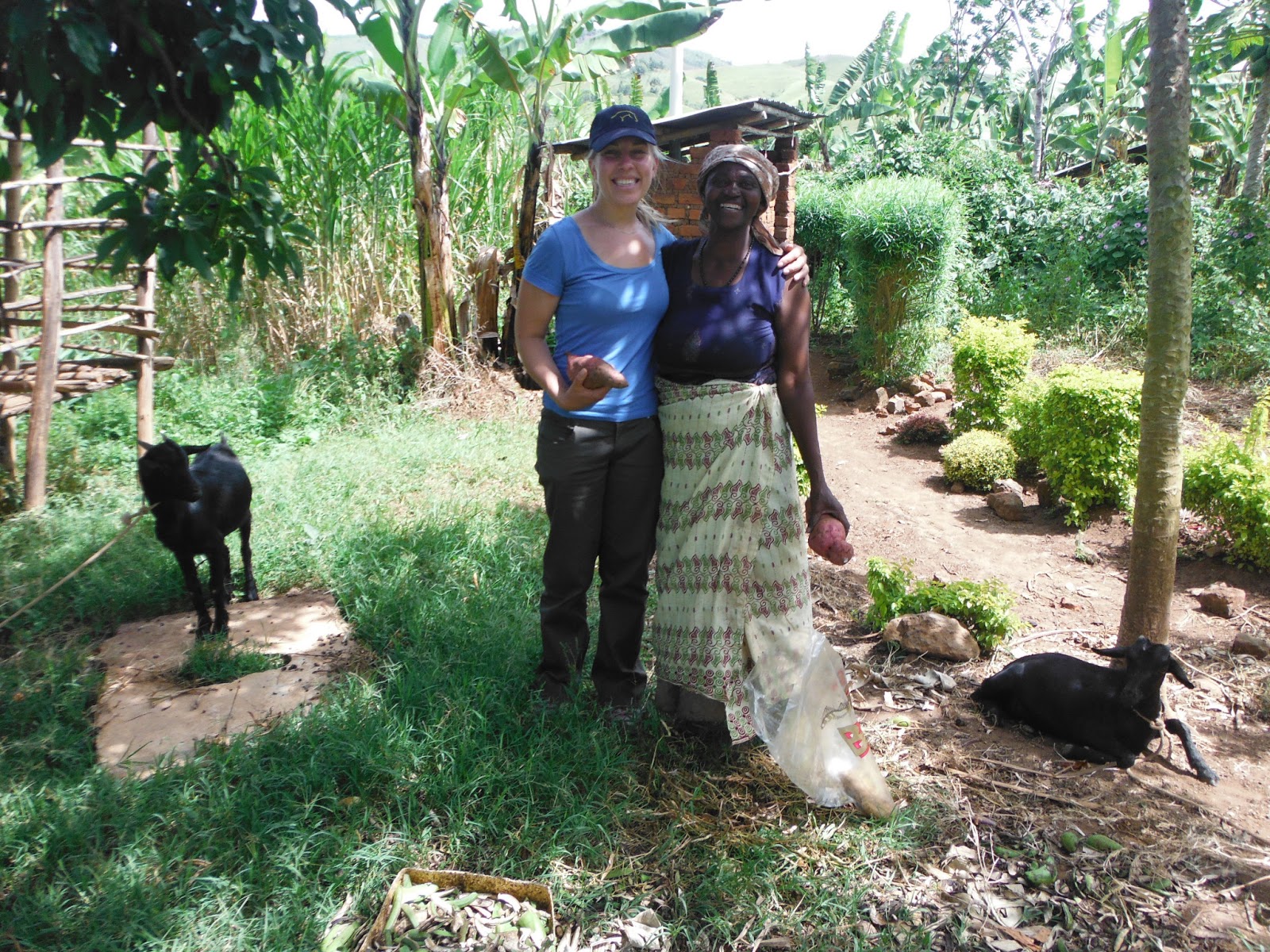 Meburo with her goats, Ilse with her sweet potatoes.